Today is a day of joy. A day of joy in a long string of days of joy. Some ordinary and mundane, some simply extraordinary. This week has been full of the extraordinary kind. But first:

Three and a half years ago…

The quiet of a rural dirt road lined with trees in Spring provided the space my heart needed to overflow, to break some more. Loose gravel crunched under the tires of the stroller as I pushed 10-month-old Pippa through the hardened ruts of the road encircling the sweeping green beauty of a polo field, tears clouding my vision. Already I felt like a stub of a vine, stripped away of life, bare, exposed and at the mercy of a Hand that appeared ready to take more.

I had already cried bitter tears after the loss of a stillborn son. Then more as cancer appeared ready to take my husband. Today’s tears felt selfish, but impossible to withhold. Today’s tears were for the children we’d never add to our family. The ten-year anniversary trip to Uganda we’d never get to take. These were not the greatest losses of the present, but they tore at my heart nonetheless.

I don’t quite remember what I prayed…probably a mixture of simple sorrow over new losses recognized and felt, and anger over the injustice of the sheer volume of losses that felt unique only to us.

Somewhere in the midst of that bone rattling stroller ride and my uncontrolled tears, a quiet voice spoke louder:

Those are not your dreams to close the door on. They’re mine.

Truthfully, grieving them felt easier. I could let my heart drink the necessary draught and then lock up the door and walk away from that particular pain. Instead, to hold onto these words–to believe they were from God even, required my heart to remain tender to those desires, even as there was no promise of fulfillment given. Yet I could not deny that they had come from God, so foreign to the nature of the thoughts and feelings my own heart had been running on that day, and the sound of His heart so familiar .

And so we waited, and didn’t grieve and yet somehow didn’t assume there would be more children or a trip.

It feels strange to sum up so miraculous a story as Chris’s in just a few words, but the short of it is that there have been no signs of cancer since the initial months following his start of treatment over three years ago. We are humbly grateful.

If you read my last post, you already know that we decided to pursue another child two years ago. We started out optimistic and hopeful, but as disappointments piled up we grew increasingly more convinced that our family was complete. The statistical odds doctors continually gave us only confirmed this suspicion. The weary pursuit brought us to the place of finally saying, If God wants another life to exist–for all eternity–then He will make it happen. Truthfully our “odds” are 50-50; either he wants us to have another child or he doesn’t.

He did. A positive test shocked us in February, and the next several months brought a mix of euphoria, white-knuckling, and unexpected medical complications. Physically, I felt great. I had energy, very little morning sickness, and very few pregnancy side-effects.

On paper, it was a high-risk pregnancy. I’ll spare you the list of reasons why, but most of the factors had thus far had little-to-no impact on how it felt like the pregnancy was going. The most relevant factor was placenta previa–a condition where the placenta randomly grows over the “exit route,” ultimately necessitating a c-section. Any natural labor could result in serious hemorrhaging. Initially doctors said the previa would likely resolve and didn’t seem concerned about it. I dismissed it as yet another on-paper worry to set aside.

It didn’t resolve and in actuality was complete. God was gracious to us as, in my ignorance, I was hiking in Colorado, moving furniture to prepare a nursery and carrying on with life as usual.

Until 32.5 weeks when I woke up to serious bleeding.

On the way to the emergency room tears spilled as I reminded Chris that we were within 24 hours of being at the same point in the pregnancy that we were when we lost Elliott, our first. Nausea threatened as I begged God over and over, This can’t be happening again. Please God, not again.

A brutal 45 minutes later we heard the sweetest sounds of a strong, healthy heartbeat. More tears. Same crossroads, different trajectory. The mystery of God remains inexplicable. He takes away; He gives. His familiar grace carried us through each time.

Another mercy: my mom was in town visiting already, so she was able to stay with Pippa and help at home while I remained in the hospital for three days of observation  and then as we adjusted to life with me on bed rest.

From here on out every quiet, uneventful day and week felt like an achievement. It was a strange experience for me as I still felt great, yet found myself sitting on the couch receiving meals from friends, asking Chris to carry laundry for me, deciding whether going upstairs to get my phone charger was too taxing.

Anxiety mounted as I tried not to Google things like effects of premature birth, hemorrhaging and placenta previa.

The morning the baby “turned” 35 weeks brought more bleeding. Back to the hospital, this time with the recommendation to deliver. My body was going into labor and waiting would be risky. An hour and a half later, Eddy Christopher was held up over the blue surgical curtain spread across my abdomen and our lives started all over again.

Five hours after he was born I finally got to go see him! Eddy was disconnected from most of these cords within the first few days.

Born weighing 5 lbs. 8 oz., Eddy’s lung were fine and he was able to breathe without oxygen early on. He spent the next 18 days in the NICU simply growing and waking up enough to be able to eat on his own. The days were a quiet, peaceful, (and yes, somewhat inconvenient) grind as I slept in the NICU to be present for feedings and tried to catch time with Pippa at home each day. Splitting time was hard, but wow. I was overwhelmed with relief that he and I both were alive and healthy.

While Chris, my mom and others were working overtime to keep things going at home, I often found myself enjoying the quiet space of our little room in the NICU, often overcome with humble wonder at the tiny boy snuggled on my chest. Who are we to have such a gift? How can this all be real? God, will you do the same for our still-waiting friends and family? You are surely able!

If it weren’t so cold out, I think I’d like to go back to that dirt road around the polo field and take another lap, praising the God who holds both my dreams and disappointments, dealing kindly and justly with both.

When Pippa first came to the hospital to meet her brother, she decided it would be important to wear her veterinarian costume to be safe :). 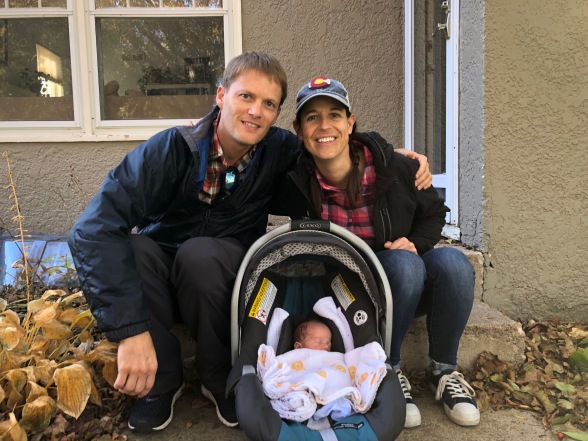 This boy wants to be HELD!!!

One thought on “Eddy Christopher Lawrence”