If you’ve ever tried sweeping all the dog hair into the dust pan, then you have an idea of what it’s like to attempt a blog post after over a month of silence. Try as you might, the elusive hair puffs and floats away, resettling where you just swept moments ago. It’s impossible to capture it all without spending an inordinate amount of time trying. Similarly, every time I think about sitting down to write an update, my thoughts scatter in all directions–from the medical to the personal to the spiritual to the mundane. I’ve resigned myself to the impossibility of communicating it all in one update, and am resolved (October 15 is the new January 1) to just update more often. But for today, I’ll pass on some snapshot updates.

Medical: This past Thursday was Chris’s 19th infusion of chemotherapy and 6th of immunotherapy. Currently we’re on a two weeks on, one week off schedule. We’ll continue this plan for three more infusions and likely have another scan sometime mid-November. Chris is enduring and persevering well. Each week it’s felt harder for him to bounce back, and he’s developed a greater underlying fatigue and sensitive stomach. And yet we both continue to remember the many reasons we have to be grateful:

What we’re praying for, medically: 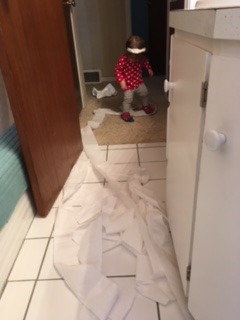 A Week in the Life of the Lawrences:

Occasionally people have asked what exactly we’re doing…what is a typical week like. We’ve gotten into a sort of rhythm, so here it is:

Thursday: Infusion day. Chris’s mom, Marcia, or one of Pippa’s aunts, Anne or Diana, come over to hang out with Pippa so Chris and I can head to the Avera Cancer Institute for anywhere between 4-7 hours. Some weeks we tack on a check-in appointment with the doctor or have to wait for the labs to come in or some other delay keeps us there longer than other weeks. The actual infusion takes 3-4 hours. Then we come home, Chris settles in on the couch and we eat Chinese take-out for dinner. We’ve learned that chemo has a way of permanently ruining Chris’s taste for any foods eaten close to infusion, and since neither of us are especially attached to Chinese (Thai is our favorite!), we’re okay with it being on the forever-hate list on non-chemo days.

Friday: Recovery day. Chris usually goes for a walk in the morning while he still feels okayish, and then the rest of the day he sleeps or fights the queasiness on the couch with either t.v. or an audible book. The nausea meds are especially helpful and have kept him from having to skip any meals still.

Saturday: Another recovery day. Some weeks Chris begins to feel better by Saturday, other weeks it’s another nap/fight the nausea day.

Sunday: Hump day. Generally by Sunday Chris begins to feel better, though he may still take an afternoon nap. In our efforts to keep Chris healthy we haven’t been attending church and risking the collective germs and nursery funk Pippa (and we) would be exposed to. So far it’s worked; Chris has stayed healthy and cold-free. Instead, we usually get Pippa settled for a nap and listen to a sermon online and then spend some time praying together. In the afternoon we often spend time with family, go to a park or watch football.

Monday-Wednesday: Usually Chris feels more normal these days and heads into the office building his dad and brother share. They have an extra office he can use, so he uses these days to cram in a week’s worth of Lifelines work and general life stuff (i.e. bills, insurance claims, car maintenance, etc.)

Other than Thursdays when I’m with Chris for the infusion, my days are mostly spent taking care of Christopher and Pippa. Since we’ve been trying to avoid most refined flours, sugar, and eating less dairy, I’ve spent a fair amount of time researching and learning new recipes. We’re also all three at home for meals most days, so there’s prep and clean up three times a day.  Of course the Littlest Bird in the Nest (see Instagram #littlestbirdinthenest) gets a lot of my attention–frequent trips to the park that’s just a few houses down from us, library visits (we’re at 600 of the 1000 Books Before Kindergarten program here in Sioux Falls : ) ), and lots of time climbing on, over and around the furniture. At first I struggled with the volume of mundane tasks that fill the day–feeling guilty I wasn’t “doing more.” But then I finally recognized the obvious that my primary job is my family right now, so these tasks weren’t keeping me from more important things, they are the most important things. I’m thankful to have the freedom to be with these two so much.

Chris and Pippa and I enjoyed an incredible fall hike last weekend.

While we missed the aspens of CO, these watercolor maple leaves were spectacular!

Speaking of the Littlest Bird in the Nest, I have to give a little update on her, our constant source of sunshine. She continues to infuse pure, deeply felt joy into our lives. Here are a few of the things we enjoy most about her: 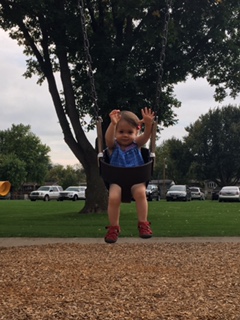 Not only does she cry when I take her out of the swing, but now she cries when I stop pushing her and the swing starts slowing down!

2 thoughts on “Catching Up”