“Chris, what if she’s weird…or homely…or dumb as a rock…or we just don’t like her?” I worried out loud to my husband while I was pregnant with our second, Pippa Kate. “She doesn’t have to be super model gorgeous (in fact, I’d rather spare her that potential burden), or a genius or anything, but I hope that she’s at least normal and cute enough.” These were among my more shallow fears in a pregnancy plagued by battles with fear.

More often, I found myself asking God just for help to trust him, to not succumb to fear and anxiety, and to give me courage to step out and plan and prepare for the arrival of a healthy baby. After losing Elliott near the end of my pregnancy just months earlier, I was on edge. It’s a wonder she didn’t come out twitching or half frozen considering how frequently I’d down large amounts of either sugar or ice water to get her to move around and reassure me that she was still okay.

Just three months into the pregnancy, on a dark January night, Chris and I had our own little gender reveal party. I’d made an origami blue fish for a boy and a floral origami crane for a girl, and then asked our OB nurse Marguerite to put the correct gender in a gift bag for us to open together later that night. We were both sure we were having another boy. I knew another boy would never replace our Elliott Nathan, but I just felt like another boy was on the way. We closed our eyes, counted to three, and flipped the bag upside down over an ottoman.

Upright and staring right at us was this cheeky little bird. I looked at Chris and burst into tears. My heart ached with unexpected disappointment and sadness, and of course a layer of guilt that settled in too. It’s not often that I feel God speaking clearly and unmistakably. But in that moment, I sensed him say very gently, “You have no idea how much joy this little girl is going to bring you.”

Later, I realized that my tears weren’t about not wanting a girl, but about unfinished grief over Elliott. While another boy wouldn’t bring him back, we would get to resume our dreams of parenting a boy, unpack all the cute boy things we’d had to store away, and somehow pick up where we’d left off. Now all those bins would stay in storage, and the particular dreams we’d grown attached to would have to be grieved once and for all.  A girl meant starting from scratch.

And God in his wisdom knew that this was just what we needed–what our next child needed. Her own place in our family; her own identity, not as an Elliott fill-in, which perhaps we might have done with another boy? I don’t know. But what I do know is that God was right. Abundantly so!

For two days in the hospital after Pippa was born we even debated giving her the middle name Joy. Ultimately, we decided against it because we felt like we were projecting onto her what we wanted her to provide, and that somehow her name would become an extension of our story with Elliott. We wanted to protect her singular place in our lives and her uniqueness apart from her siblings. Besides, Kate just seemed to suit her more anyway.

Even so, she has been nothing but joy from the start. Easy going. Adaptable. Content. Sweet. With these stunning blue eyes that one stranger in the airport described as “welcoming.” Just a few weeks in, Chris exclaimed, “Babies are just so FUN!” I always assumed that the joys of parenting really started when babies got to about two and they said funny things and had personalities. But with this little Pip, I haven’t wanted the baby stage to end. We’ve soaked it up and enjoyed each little phase.

Tuesday this week we celebrated her first birthday with family at Palisades State Park here in South Dakota. Afternoon clouds and shady trees kept the heat at bay as we watched her lean face first into her first little cake, play with the duck puppet Chris gave her, and crawl from family member to family member while Chris recounted some of the ways God has blessed us and restored our joy in the last year. In light of our current circumstances, it was good for us to pause and remember. 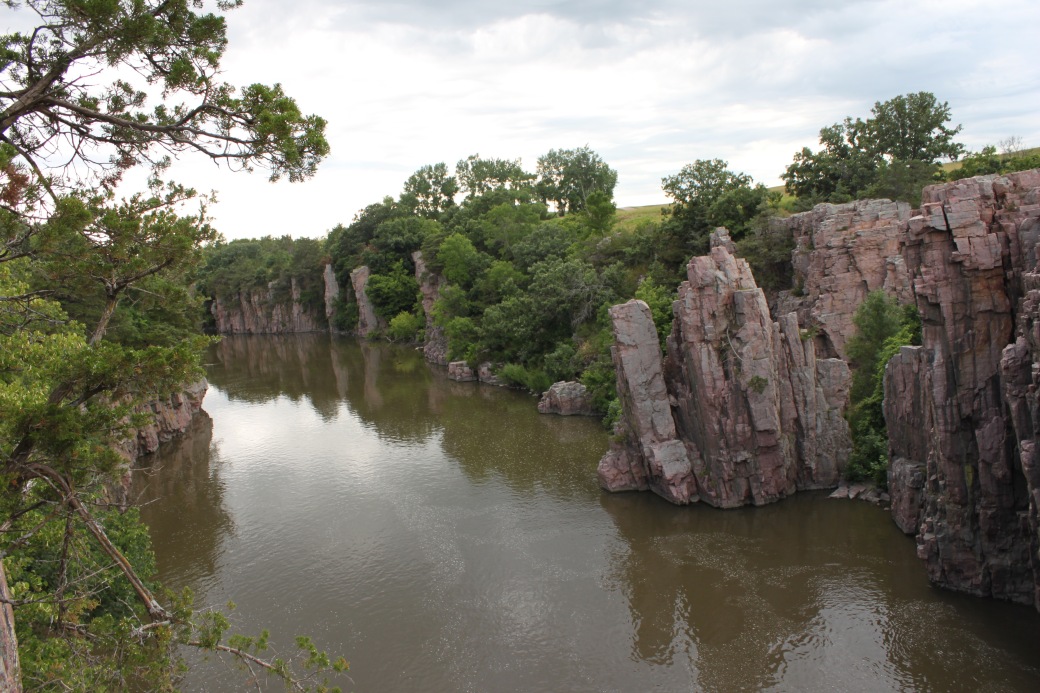 Today is Pippa’s actual birthday. She’s a speed crawler, pulls up on anything in reach, goes up and down stairs, loves feeding herself so much she’s surprised us by willingly shoving even tuna fish, mustard, Mediterranean and Indian food down the hatch (but her favorite is probably cheese, haha!), and she loves to squish her face in soft, cozy things. She stops crying when she hears music–even if it’s Jimmy Buffet’s “Margaritaville”or some other twangy country song. But anything with a strong beat really gets her little head bopping and legs bouncing. Some family members swear she says “hi,” but time will tell in my opinion. There have even been bribes of “free college” if she says Dada by the end of the day today. I’m 100% sure I’ve heard her say Dada something like 10 times already, haha. But I guess I might have mixed motives! Oh, and she’s begun expressing some very definite opinions these days. Our work is cut out for us…but we love it. She is strong, independent, sweet, and the delight of our hearts. We love our Pippa Kate deeply!

2 thoughts on “The Littlest Bird in the Nest Turns One”